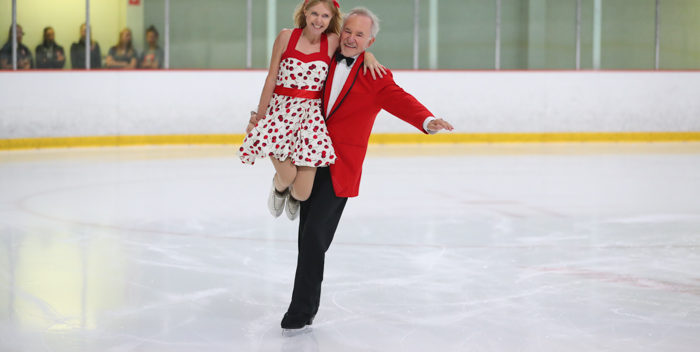 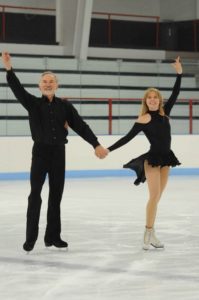 Joseph (Joe) Kasputys’ resume reads like a list of Who’s Who among the world’s most distinguished leaders and economic and financial analysis advisors:

And now, the 85-year-old, Harvard-educated businessman and entrepreneur, who has won numerous professional accolades, can add another feather in his cap.

On March 31 (2021), Joe passed the challenging, high-level ISI Dance 9 test — no small feat for any skater let alone someone approaching their ninth decade of life. Clearly, he’s not your average octogenarian, and after conversing with him, one quickly surmises that he can skate circles around people half his age — both on and off the ice. If you don’t believe it, just Google him!

In addition to his remarkable career background and accomplishments, he’s a contributing writer/commentator for several prominent publications and organizations, including U.S. News & World Report, Fortune and The Hill, as well as the Palm Beach Daily News, Chief Executive Magazine, BusinessWatch Network, RealClear Policy and the Committee for Economic Development of The Conference Board (CED).

Joe has been an ISI member for many years through the Skating Club of Natick, Mass., which operates out of the FMC William L. Chase Arena. While he mainly lives in Palm Beach, Fla., he also has homes in Leesburg, Va., Lincoln, Mass. and Sun Valley, Idaho. He has been a member of the Skating Club of Boston for 41 years and has also been a member of the skating clubs of Sun Valley, Babson and Natick, and is past president of the Washington Figure Skating Club.

Since he travels frequently, he regularly finds himself skating at the new, triple-rink facility of The Skating Club of Boston in Norwood, Mass; the Palm Beach Skate Zone in Lake Worth, Fla.; the Sun Valley indoor and outdoor rinks and the new, double-rink Ion International Training Center in Leesburg.

Joe enjoys the sport because it’s challenging, and he loves learning new things.

“You will never get it as perfect as you would like — there’s always more to learn and the potential to do it better, so there is constant challenge,” he said. “The second part that I like about skating is that it requires skills that help keep us adults young and fit. The sport is physical and requires strength, flexibility and balance. It can be as athletic as the skater wants it to be, subject to his or her ability. Jumps and lifts are good examples, but so are moves, figures and sustained stroking.

“The third thing I like is that it’s musical and artistic — there is a lot of room to create. And I guess the last thing is, it’s fun and it’s really nice to have a girl on your arms!” 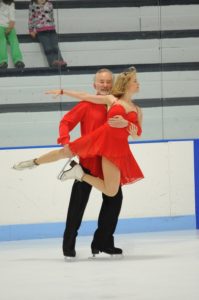 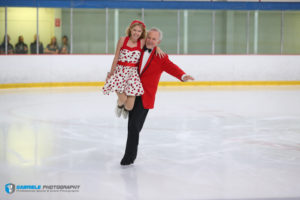 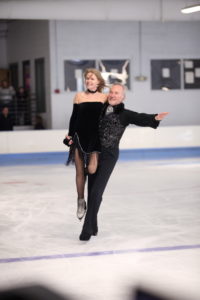 Joe’s coach, Laura Gayton, is also his ice dance partner and best friend, and they love to get into character and do couple spotlights and free dance. They began competing in ISI competitions because ISI allows pro-am participants and U.S. Figure Skating didn’t at the time.

“Laura and I decided to do it and once we did, we realized how fun ISI competitions are,” he said. “Everyone is respected and tolerated and welcomed. We like that.

“I’ve been climbing up the ladder now. Roughly, I have passed 27 tests, and I still have to do the three Gold dances. It’s a very rewarding experience from a skating standpoint. Going back to the preliminaries — I can do them at a different level now than I did in USFS. It’s made me a better a skater.

“The test sessions are a little easy to get because ISI allows video. It allows more flexibility; you don’t have to find a test session and fly there. I can fit it into my work schedule. Maybe I’ll get to Dance 10 — I’m gonna try! I’m working on the Viennese.”

When Joe, originally from Queens (Jamaica), N.Y., and his late wife, Marilyn, and four daughters moved from Georgia to Boston
in September 1970 so he could purse his doctorate’s degree in business administration at Harvard University, the family was less than thrilled. They had already done a two-year stint living in Boston and were dreading the cold and snowy New England winters.

“I said, ‘Look, we’re approaching this all wrong. We ought to join this rather than fight it; let’s make up our minds that we are going to learn how to ski and skate.’ As it happened, we settled in the town of Lexington, Mass., and our home was about a mile from Hayden Ice Arena, which is now famous for its champion precision teams. We all went to Michael’s Shoe Store in Lexington and bought six pairs of ice skates — we had no idea then that the boots and blades could be purchased separately. We then all marched over to the Hayden rink, and I signed each one of us up for group lessons. I will never forget the price — 11 lessons for $11.”

At the time, Joe was 34 years old, and his daughters ranged in ages from 5 to 15, and as the old adage goes, the rest is history!

Joe and Marilyn went on to become a long-term ice dance team, skating together for decades and performing in competitions and shows. They also participated in social dancing (non-competitive version of ballroom and Latin dancing), headed up the ice dance program at the Skating Club of Boston for 10 years and helped the Ice Theatre of New York get started in the mid-1980s.

“I am now quite involved as a supporter of Ice Dance International and my daughter Joy, who also has a USFS Adult Gold Dance medal, is a member of that organization’s board. Both these theater groups have constantly expanded my friendships — and my skating horizons.”

At the time of Marilyn’s death in 2017, the pair had been married for 62 years. Following a generous donation by Joe, the Marilyn P. Kasputys branch of The Micheli Center for Sports Injury Prevention was established at The Skating Club of Boston’s training center in Norwood, Mass.

“We stopped competing when it first became evident that she had Parkinson’s Disease, but that didn’t stop her from skating altogether,” said Joe. “She still enjoyed skating and took lessons. Her doctors marveled at what she could do despite this ailment. She only stopped after her fifth unsuccessful hip operation, which caused her operated leg to be two-and one-half inches shorter than her good leg.

“Because of skating, my wife and I made friends all around the world. My wife passed away in February 2017, but I must say I am still both making new friends and staying in touch with old friends thanks to skating. I regularly skate and see friends at four or five rinks around Boston, and I sometimes go to rinks in Washington, D.C., or the New York City area and almost always run into someone I know.

“I still participate in many ice skating competitions, entering events in compulsory dance, free dance and couples spotlight. I am very fortunate to have a wonderful pro, skater and partner in Laura Gayton, and we skate together several times a week. In the past 12 years, we have competed in both Orlando and Las Vegas three times each, and also been in competitions in Boston, Chicago, New York, Tampa, Minneapolis, Los Angeles and Dallas. In July 2018, in Marlborough, Mass., we did a number in an ISI Benefit Show headlined by Jason Brown. I am always meeting new people at these events.”

Joe suggests taking up ice dancing because “it’s more of a lifetime corner of ice skating,” he said. “Although a lot of adults in their 50s and 60s do a great job of freestyle, you can keep ice skating longer when you have a partner that can hold you up.” 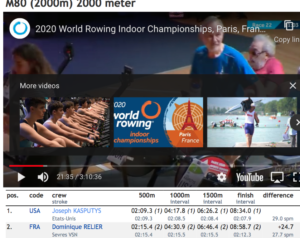 This article originally appeared in the Fall 2019 print edition of ISI’s Recreational Ice Skating (RIS) magazine. “Golden skaters” are Ice Sports Industry (ISI) jewels! If you are an ISI skater aged 65 or older, we are interested in profiling you in our Golden Skater feature. We want to share your inspirational skating story. Contact editor@skateisi.org.