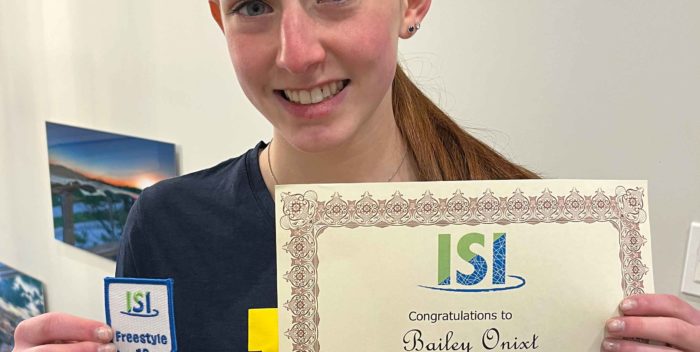 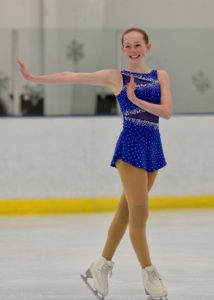 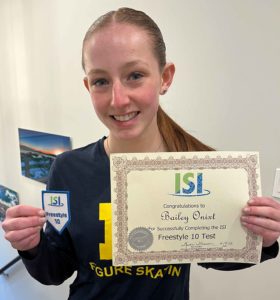 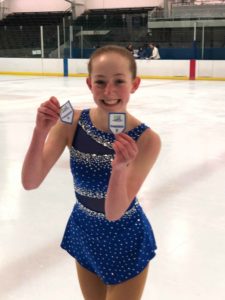 As 17-year-old Bailey Onixt prepares to reach an exciting milestone — graduating high school  — she also celebrates a remarkable skating achievement that has been almost 15 years in the making.

Bailey successfully passed her ISI Freestyle 10 test in April — a goal that was influenced by her favorite role models.

“I have grown up skating and competing in ISI,” she said. “I looked up to the director at my rink who had previously passed the test — Heather Aseltine— who was my coach at the time,  in addition to my first coach, Blair Mack, and had always aimed to be like them. To me, this is an amazing culmination of my ISI skating, and I will forever be thankful for the coaches and skaters that have helped me achieve this test.” 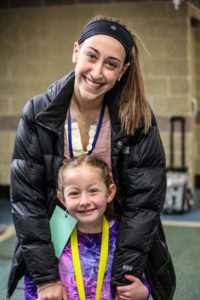 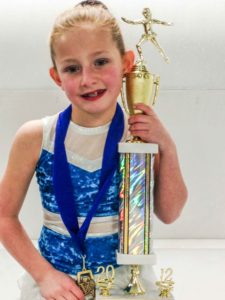 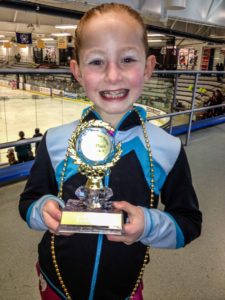 Bailey began skating at the young age of 3 after she saw her first ice show and decided that she wanted to be “like the other kids on the ice.” Skating out of Northbrook Sports Center in Northbrook, Ill., she grew up competing all around the Chicagoland area and has fond memories of helping with the Winter Welcome competition at her home rink.

“Running score sheets and competing in many different events are some of my best memories as a child,” she said.

What does she like best about the ISI testing and recreational competitive programs?

“I love how testing for children has an amazing curriculum,” she said. “It does not go too fast, yet still seems to hit all the skills needed for everyone in order to become an amazing skater. The competitive program really provides an event for everyone, from the shoot the duck competition to interpretive and jump and spin. I have always loved the competition program.” 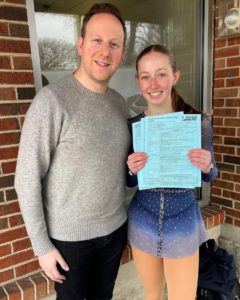 Bailey with her coach Josh Fischel

Reflecting on the ISI Freestyle 10 test, she stated: “For me, the most difficult part was the triple toe double loop because I usually excel at combinations with a double toe; however, I am not very skilled at loop, so for me, this was a big challenge.”

What is her advice to skaters striving to reach the Freestyle 10 level?

“Skaters who are aiming to test the level need to be aware that it may not happen on the first try, and that is okay! In skating, perseverance is extremely important. Just because you are having trouble with one skill does not mean that you are unworthy of passing the test. This test is extremely difficult and takes time.” 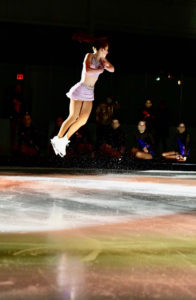 Music to Skate to: Anything  pop — mainly Taylor Swift

Skater to Watch: “Probably Jason Brown; he is also an amazing person, which make him even more awesome to watch!”

Role Models: “My coaches — Joel Fischel and Blair Mack — for always pushing me to learn new skills and believe in myself. I am very lucky to have them in my life.”

Food: Any type of pasta

Little-Known Fact About Bailey: She loves to ski and has been skating her “entire life!”

Bailey with her coach Blair Mack, center, and her former coach, Heather Aseltine 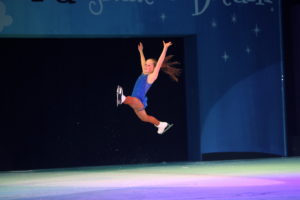