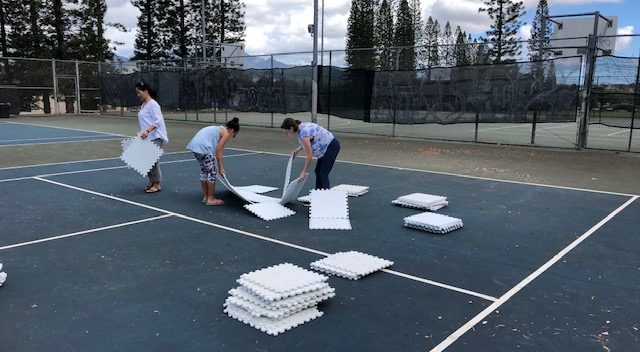 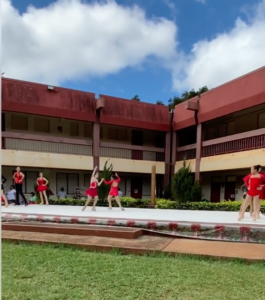 Hawaii’s Tropical Blades Synchronized Skating Team and their coaches are truly the embodiment of grit — the raw endurance, perseverance and passion that keep individuals moving forward despite obstacles.

Since the temporary closure of Ice Palace Hawaii, the only rink on the Hawaiian islands, in 2020 due to COVID-19, the team has been practicing on a “patch” of synthetic ice that measures 26 feet by 16 feet. No one in their wildest dreams thought they would still be practicing on artificial ice two years later.

In the process of renovations, Honolulu-based Ice Palace Hawaii is expected to open before the summer, according to Ice Palace Hawaii Vice President Michelle Lazo. The opening has been delayed due to shipping delays. The facility is receiving a fresh coat of interior paint and will feature new flooring, new bleacher caps and new arcade games. Updates are also being made to the snack bar and pizza kitchen, and once the necessary equipment is on hand, ice maintenance will begin.

“I was notified on Sunday, March 15 [2020], after synchro practice that the Ice Palace would be closing at the end of that day until further notice due to COVID-19,” said Robyn Conboy, who coaches the team along with Susan Donahue. “We had just finished practicing for two hours, and I drove across the street to the grocery store. Before I could get out of the car, I received the call. It was very surreal. We were practicing to compete at the 2020 ISI World Recreational Championships in Boston and some team members had qualified to compete in the 2020 U.S. Figure Skating National Showcase competition in Colorado as well.”

“Synthetic ice is harder to skate on because you don’t automatically glide,” said Conboy. “You have to push and push. The ice contains an oil that heats up your blades. The faster and harder you push, you will glide. It takes three times as much power required than on real ice.  It is still not like gliding on the ice, and it is harder for the smaller skaters as well. You also have to sharpen your blades frequently because the synthetic ice dulls them very quickly. All our programs had to be re-choreographed to fit the synthetic ice, also factoring in the gliding factor. It is very hard when you fall — you do not slide; you just fall straight down. 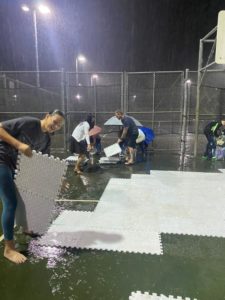 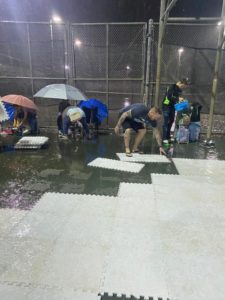 “Skating outside is fun and exhilarating, but we always have lots of sunscreen and umbrellas on hand as well! My first day outside I didn’t really think about it, and I was very sunburned when I got home! Sometimes it is so bright that the skaters wear their sunglasses. On the other end  — Hawaii is known for monsoon rain showers and one evening in the middle of practice we were monsoon rained on and had to scramble to get our personal items into the cars and pick up all the ice. We set up on various tennis courts and have also had to dodge tennis balls now and again!” 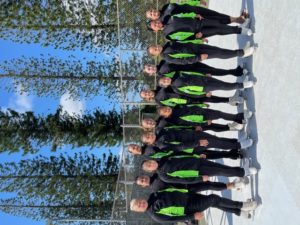 The team, comprised of skaters ages 9 through 19,  practices at least once a week and leading up to demonstrations, they skate and/or participate in off-ice practice three times a week. They are currently preparing for a demonstration April 30 at the Mililani Spring Craft Fair.

“We have lost about half or more of our team,” said Conboy. “We would love to have more but our 11 skaters that we have now barely fit on the ice surface that we have.”

Tropical Blades is looking for a permanent building, so they can set up the ice and leave it down, where it will be protected from the elements. So far, they haven’t found a building that they can afford or one that is appropriate for their needs.

They are  now a 501 (c)(3)non-profit organization, and they are trying to raise funds to enlarge their synthetic ice area to continue practicing, with the hopes of competing again in the future. They have started a GoFundMe page on Facebook, with the goal of raising $20,000 for 1,599 square feet of synthetic ice tiles. 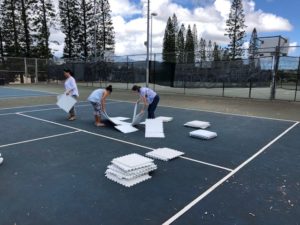 Looking on the bright side, the team has learned to work together in the face of adversity. Before they can skate, they must build their own ice surface. There are over 200 synthetic tiles that must be loaded into a car, unloaded at the site, put together, checked at the seams, and then taken apart at the end of practice, carried, reloaded into a vehicle and unloaded at a storage site.

“The whole process is repeated the next week,” said Conboy. “To see the skaters working together to do this is amazing, and we never miss an opportunity to appreciate their parents’ hard work and dedication to their children. It is a very special and awesome group of very supportive people, skaters and parents alike.” 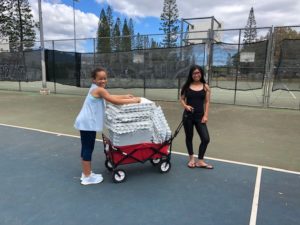 “Skating is their passion, and it shows them that where there is a will, there is a way,” added Donahue.

“Through this common struggle, we’ve been able to grow as a family of skaters, parents and coaches,” said team captain Kimberly Martin, adding that their opportunity to compete has grown exponentially as members of the ISI.

Skater Mae Dangerfield appreciates that all her teammates are there for each other during hard times.

What does Tropical Blades like best about being a part of the Ice Sports Industry (ISI)?

“ISI to me has heart!” exclaimed Conboy. “ ISI is a wonderful institution that allows skaters to skate for the love of skating! It is all-inclusive — all ages, all ability levels. Skating is a lifetime love, a passion not defined by age or ability, and ISI allows everyone to participate. It teaches people respect for the young and the old and celebrates all facets of skating and skaters’ abilities.”

Parent Tiffany Louchez agreed, commenting that she loves ISI because it allows skaters to skate for the love of skating. 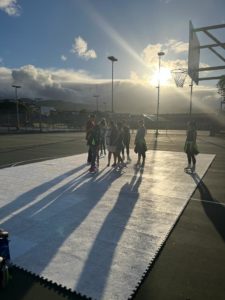 The original Tropical Blades Synchronized Skating Team was established in the mid 1980s under the Aloha State Skating Association. They had a small team of eight skaters that competed in two years of the Ice Sports Industry (ISI)* District 15 Championships in Los Angeles.

“We won the first year and came in second the second year, “ said Conboy. “The team grew to 16 skaters, and we competed in our first ISI World Competition in Dallas in 1988, where we placed first.  We also had an adult team that competed at ISI World Championships in Los Angeles and placed first in both categories that they competed in. The teams disbanded and we were without synchro for quite a few years. The current Tropical Blades Synchronized Skating team formed about four years ago.” 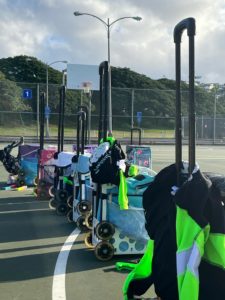 *Formerly known as the Ice Skating Institute of America