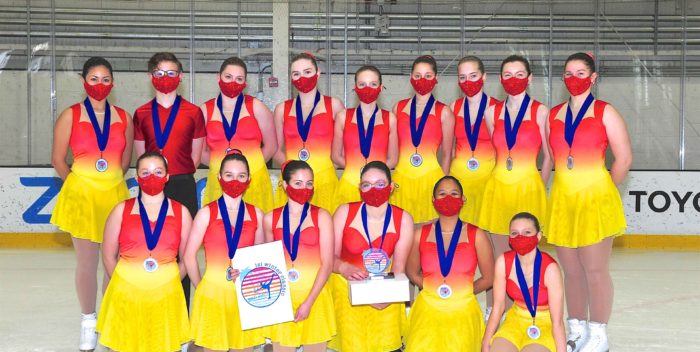 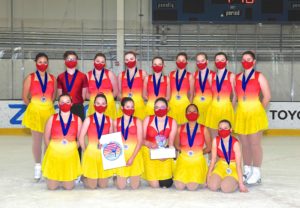 Have you ever wondered what it would be like to be an ice skater in Alaska? You’re probably thinking it would be ideal! Ice, cold and snow — what could possibly be better?

Well, if you talk to members of the Juneau Skating Club’s Team Forget-Me-Not, you’ll not only be enlightened but you’ll also walk away with a newfound appreciation for just how hard these athletes work to make their ice skating dreams come true.

“Juneau is a small town of about 30,000 people, nestled in the Tongass National Rainforest,” said Nicchia Leamer, manager of the synchronized skating team, which is comprised of 15 individuals, ages 13 to 17. “It is a peninsula, so you cannot get into or out of Juneau except by plane or boat. 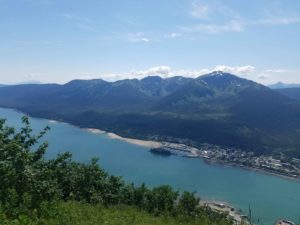 Juneau, the capital city of Alaska (Photo by Tracey Maxwell)

“People think of Alaska, and they tend to think of northern Alaska, with endless snow and ice and igloos — and it can feel like that in winter — but really, our climate is very temperate, and there are no igloos. It’s very green here, with lots of trees and water, and we have a glacier. In the summer, we have super long days, and in the winter, we have super short days.”

Without road access, you can imagine just how difficult it is for Team Forget-Me-Not to travel to competitions; flying is their only option.

“It’s very expensive to travel, and we try to travel twice a year, and during COVID, fundraising opportunities we have done in the past were really limited,” said Leamer, who also noted that when the team does travel, many of the skaters’ families accompany them as well and extend their trips for vacation time. “Sometimes the Juneau cheering section is so big, you would think we are locals!”

In addition to the travel obstacle, skaters must rely on online shopping to get their ice skates and other skating attire, as there are no skating shops in Juneau. 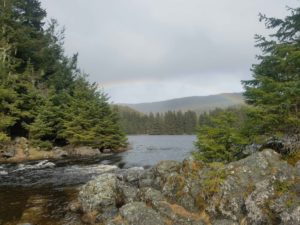 “Most of our girls have never had a professional skate fitting,” said Leamer. “We just buy our boots online or from shops we’ve worked with in the past and hope for the best with a virtual fitting. Things take a long time to get here, so buying costumes is something that we have to really plan for and pray there aren’t any unexpected growth spurts!”

Then, there’s another little hiccup: Team Forget-Me-Not practices at Treadwell Ice Arena, the only indoor skating rink in Southeast Alaska, and the facility closes in April and doesn’t re-open until the end of July each year.

“Having our rink closed for three months in the summer makes it hard on the team and all of our skaters,” said Leamer. “While the rink re-opens in late July, there are really limited hours available through most of August, and August and September are spent getting skills back instead of moving forward. It’s a huge disadvantage, and we obviously can’t just drive to another rink.  While some skaters have been lucky enough to go to a camp or have a week of vacation or so where there is another rink, most of our skaters just don’t skate in the summer at all. And even when our rink is open, we have one sheet of ice to split between high school hockey, junior hockey, adult hockey, all the figure skaters, speed skaters and recreational skaters. The rink is always busy, and it is hard to get ice during non-school hours.

“When the rink is closed, we have done a variety of things, including doing off-ice camps and trainings. This summer, our senior skaters are leading off-ice practice twice a week in hopes of keeping everyone in shape and motivated. Sometimes Juneau Skating Club also offers classes — yoga, gymnastics, strength training and more — to all skaters, not just the team.”

Despite all these challenges, Team Forget-Me-Not still managed to earn a 2nd place at the 2022 Ice Sports Industry (ISI) Winter Classic in February at Solar4America in San Jose, Calif.!

While the team’s upcoming competition schedule hasn’t been confirmed, they typically compete in one ISI event and one U.S. Figure Skating competition each year.

“This season we are looking at either the ISI Winter Classic or the ISI West Coast Championships,” said Leamer. “If I could find us a sponsor, I’d love to do the Synchronized Championships as well, but I can only push our parents and their budgets so far!” 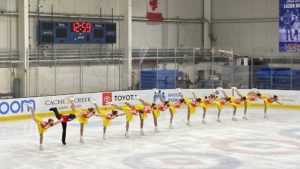 “My favorite thing about ISI competitions is the variety and abundance of choice they provide, said Aliyah Overturf. “There are so many possibilities for programs to pursue that there’s never an opportunity for boredom. You can compete with your synchro team, which is wonderful, but you can also do so many individual events. This generous variety provided by ISI makes competitions thrilling.”

Maggie Higgins enjoys meeting skaters from across the country and representing Alaska on the ice.

“ISI competitions push you out of your comfort zone which applies to being out in the real world,” added Jade Hicks. “Skating, in general, requires lots of self-improvement, which is something that I love greatly.”

While Juneau’s synchro team is surely one that is hard to forget, especially after learning so much about the obstacles they face, do you know why it’s named Team Forget-Me-Not?  If you guessed that the “Forget-Me-Not” is the state flower of Alaska, you’re right! These hardy flowers will thrive even in the harshest of conditions — just like the Juneau synchro skaters!