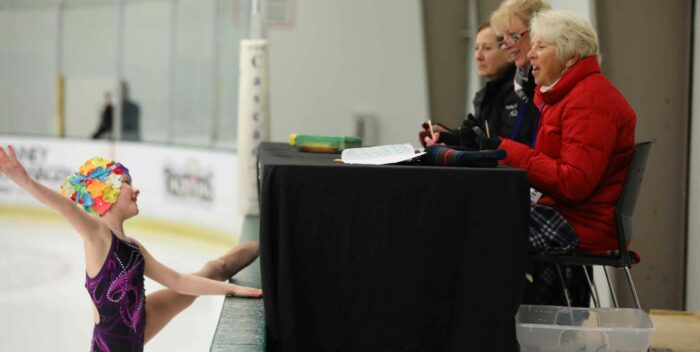 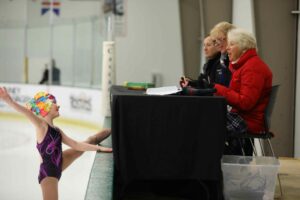 The following Q&A is intended to help skater parents/guardians learn about ISI event judging. If you have a question about ISI skating events, please email ISI Skating Programs and National Events Director Kim Hansen at khansen@skateisi.org.

Q: My daughter has chosen a popular song she’d like to skate to for her next Freestyle 2 competition program. She’d like to enter the technical event, but is she allowed to skate to something with vocals in that category? Her coach also said she will have to cut it a little shorter because the part she’d like to skate to is now 1:45. Is this really necessary? This piece sounds wonderful just as it is.

A: Yes, vocal music is fine for any ISI event program, but you should still check with your daughter’s coach to make sure that music will be appropriate for the program choreography. The duration time for that program is 1:30. The skater is allowed a leeway of 10 seconds over this time, however it is always a good idea not to cut it too close, to allow for differences in the audio equipment. There is a penalty for exceeding the leeway but no penalty for being under.

Q: We were very surprised recently to see that a skater who fell during his program actually won the event! Isn’t there a major point deduction for this in ISI competition?

A: No, there is no penalty for falling in any ISI competition event. A skater who falls while performing a required maneuver has three attempts to successfully complete the maneuver in the program, and only the best attempt is scored. If the fall is on a non-required maneuver, judges could give a lower score under “General Overall” or “Judge Appeal” if they think the fall disrupted the flow of the overall program.

Q: At a recent ISI World Championships, I noticed that my daughter did a lot more difficult jumps and spins in her Light Entertainment routine than the girl who won. She seemed to just do a lot of “dancing on ice.” Why did that happen?

A: In the Spotlight category, there is no score given for technical maneuvers. Those programs are judged on the entertainment value of the performance, including: Costume and Prop, Music and Choreography, Originality, Duration, and Judge Appeal (by all three judges).

Q: I understand that figure skating is often subjective and based on opinionated judging, and for that reason, my daughter’s coach and I both encourage her to compete against herself each time, trying to improve with each performance. But when there are three judges watching her sit spin, for example, isn’t it true that one may prefer a faster spin, while one may like it slower and better controlled, and yet another might give a higher score for a lower position? How is she supposed to please everyone on the panel?

A: Teaching your daughter to do the best she can and compete against herself is a healthy and commendable approach to it. She is bound to be a winner more often than not, and she is in complete control of that! If you are talking about the sit spin receiving a score in a technical Freestyle 4 event, as with most ISI competition events, each judge has different criteria on his/her judge sheet — and only one judge is scoring the sit spin to compare her sit spin performance with the other skaters in that event group. She will not get three varied marks on that one maneuver. The required maneuvers are divided between the three judges, as are the overall performance scores for Correctness, Pattern, Posture, Duration, etc. All three judges give a score for “General Overall,” so that category will carry the most impact on the final placement. This is one place where they are able to give their opinion of the entire performance, all things considered. The only events where all three judges would be evaluating the sit spin would be Solo Compulsories and Jump/Spin.

Q: My son’s synchronized team has 24 skaters on it! Wouldn’t it be easier for the skaters, and result in higher scores, if the coach were to split it up into three separate teams?

A: Yes, it would be easier, but that wouldn’t necessarily result in better scores. It is certainly harder to stay together in a group of 24 than a group of eight, and the judges take into consideration the size of the team. They are looking at things like the required synchronized elements — Line, Circle, Block, Wheel and Intersection — along with Unison, Correctness or Technical Merit, Transitions, Rhythm, Team Presentation, Duration and General Overall. While all of the teams do basically the same maneuvers in their choreography, there are many more exciting variations that can be done with more skaters!

Q: Our Youth synchronized team recently competed against a team that I know had two teenagers on it. I believe these skaters were 14 or 15 years old. Don’t they have to be on a teen team?

A: All synchronized teams are based on an assigned age category, and the team must be comprised of a majority that fall in that category.  A Youth team should therefore have a majority of skaters 9-11 years old.  If the skaters were 14 years old and they did not affect the majority count, then they would be eligible to be on that team.  If the skaters were 15 years old, then they would not be eligible to be on that team because 15 falls in the Teen age bracket and as per ISI rules, can only skate “down” in age to a Senior Youth team. The 14-year-olds are perfectly legal to be on that team because their age falls in the Senior Youth age category and that is only one category older than Youth.  Another point to consider is that synchro ages are calculated as of July 1 of the season year, so a skater could be 14 years old on July 1 of the proceeding summer, turn 15 in September and still be eligible to be on that Youth team.