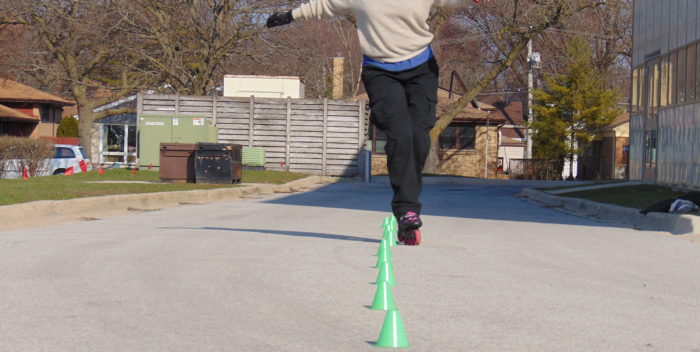 Now that everything’s closed because of the coronavirus disease (COVID-19), the parks and parking lots are wide open! Since there’s no ice to be had, I like to put on my rollerblades (inline skates) and skate outside. Here are a few of my favorite exercises: (You can also perform these exercises using artistic inline skates, such as Pic skates, or quad roller skates.)

Stroking Uphill: This is a great leg workout! The steeper the hill, the harder it is to skate up. Be sure to practice the lovely posture and extension you learned on the ice.

Power Circles:You start out doing slow crossovers in a small circle, then gradually increase both your speed and the size of the circle as you spiral outward. I like doing them in a big open parking lot because I can get going really fast, and there are no walls to worry about as there are in a rink.

The next few exercises involve a line of small cones. They’re based on freestyle slalom skating, a type of competitive skating done on rollerblades. Slalomers weave through lines of cones in creative ways. I like this type of skating because it doesn’t try to imitate ice skating. When I’ve tried to do figure skating moves on artistic inline skates, I’ve been disappointed because the skates just don’t work quite the same way. Instead of trying to imitate ice skating, slalomers have developed their own style that uses the special features of rollerblades. It makes for an exciting new skating experience! Search for “freestyle slalom skating” on YouTube and you’ll find many inspiring videos.

For these exercises, I set up a line of 10 small cones placed around 3 feet apart. If you don’t have cones, you can make some from paper or just put chalk-marks or small pieces of tape on the ground. The first time you try an exercise, put the cones far apart (maybe 4 to 5 feet). Then gradually bring them closer together.

Slalom: Go back and forth between the cones, forward or backward. Try it on two feet first (slalomers call this fish), then on one foot. This sounds like edge pulls in figure skating, but it feels very different on wheels! 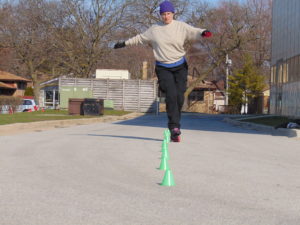 Snake: This is just like slalom, but put your feet in a line, one directly in front of each other. It’s easiest if you put most of your weight on your rear foot and use your front foot to steer. Try it going both forward and backward. 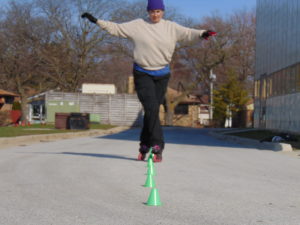 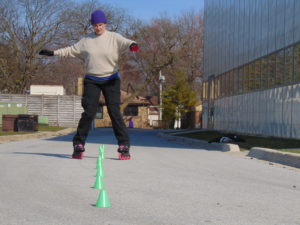 Crisscross: This one is all on two feet. Swizzle past the first cone with one foot on either side. Then, cross your feet and glide past the second one with one foot on either side while keeping your feet crossed. It should feel like you’re on both outside edges at once. Uncross your feet and swizzle past the next cone. Start with putting the same foot in front on every cross, then try alternating. You can do crisscross both forward and backward. Going backward, the motion feels easier (it’s like back crossovers), but aiming around the cones is tricky!

If you have trouble turning your skates enough to get through the cones, it’s probably because they, like most rollerblades, are set up so that all the wheels are on the ground at the same time. To make their skates more maneuverable, slalomers rocker them. Setting up your skates this way imitates the curvature of figure and hockey skate blades by raising the front and back wheels off the ground. To rocker your skates, replace the front and back wheels with ones that have a diameter of 4 millimeters or less than the middle wheels. This will make your skates feel less stable because you’re only on two wheels at a time. If that makes it too hard to skate, you can ease into it by replacing the front wheel first, skating until you feel comfortable, then replacing the back wheel. Having rockered skates makes these exercises much easier, once you get used to the balance!

If you think skating around cones is fun, check out “The Art of Falling: Freestyle Slalom Skating” by Naomi Grigg. Naomi explains these exercises and many more. She also has instructional videos on the Freestyle Warehouse YouTube channel.

(Editor’s note: We recommend wearing protective gear when rollerblading — helmet and both wrist and knee guards.)

Adult skater Bev Thurber is the author of “Skates Made of Bone: A History,” published in February 2020. You can read her blog at pagophilia.com.